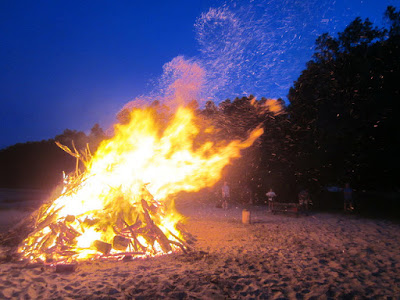 In the days before lighthouses, bonfires would be lit on the heights near a port to guide merchant ships safely to the harbor.

If you stood on a high cliff with a flame in your hand, you couldn't be seen - and ships would stay away from your port, no matter how great it was built.

Of course, we started out this case study with the greatest intentions:

This meant it made sense to do this - that it was emotionally and rationally the best thing to do. I was sold - and I acted.

On the face of it, we were faced with two obstacles:

So those two factors might have been the final straw. Each could have been overcome independently or together (I've done bigger batches than this, but never with the intention of fully marketing them) - but that wasn't it.

We are again stopping just short of fully marketing per the "Multiple Eyeballs" theorem - because I've found something which is so vital, it makes everything else seem irrelevant.

I've found a way to beat back the darkness by building bonfires rather than starting up a handful of matches.

The Shadow over Self-Publishing

It's a shadow that has grown longer as ebooks became more popular, and as the idea of a digital "book" became less defined as we ported it to more and more platforms and formats.

That shadow is actually over the whole of the book publishing industry, and is forcing them to evolve rapidly.

For the traditional publisher, my news sources tell me that this is really hitting them in the pocketbook, but they have been shifting their losses to the individual author who has gotten hurt most.

Authors, however, are evolving as well. Smart ones are only giving up their print rights to the publishers - and for shorter time periods. They are keeping the ebook rights. Authors are also realizing that merchandising and peripheral products can be more valuable than a book in print or any single media.

You've seen hints of this where I say that your book-as-a-content-envelope can be ported to audio, video, PDF, and various combinations of digital files in a bundle. You can sell print versions in hardback or paperback. You can create CD's or DVD's with your audio, video, or combinations of the two. Even add in other digital material in those discs. There are at least three major Print-on-Demand publishing firms out there which can get your book distributed internationally for no additional cost to you beyond buying a proof copy. Your CD or DVD can be POD as well, through Kunaki.

Meanwhile, you can sell these books directly from your own site and keep 90% of the royalties or more - while not having to keep up the backend. Even embed Kunaki's sales link on your site and have them ship directly to that customer.

As a writer, you are freed to do only the amount of marketing you want to - and have all the backend sales, production, and delivery done on your behalf for between five and ten percent of your self-determined price. (And many of these offer a pay-what-you-want choice - so the client can give you a tip...)

I started out with the very old-school approach that quality books, with good covers and descriptions sold the books. And that worked out to be true.

I got financial freedom by jumping on the public domain bandwagon (a bit late, it's true) but also unseated several others who went before me - simply by creating better quality representations of those still-popular author's works. The couple of hundred books I published (really just as tests) started covering my bills - so much that I could actually start doing these publishing tests on a full time basis. However, my income was becoming pegged instead of scaling with each new book added.

What was missing was a real audience - a loyal band of fans who flocked to each new release and was duty-bound to find and buy all the earlier ones.

Publishers don't have audiences, however. Well, not the same as authors do. You can see Dover Publications, and Acres, USA both make sizable income from republishing public domain books. And people do look to them for rare books that are still valuable. I've also found that the much-less-loved textbook publishers have gotten other books republished for extremely inflated prices - and have seemingly a choke-hold on those titles (or so they think) and probably have no audience at all, since it's an extreme niche which can afford to pay those prices.

That is public domain publishing. It's fair amount of work to make income, but if you choose books carefully - the ones which are still popular - you can assemble a backbench which is profitable.

This last case study also brought up why I got into publishing public domain books at all - which wasn't for the money...

The Light Shines Through

I started out researching self-help and self-improvement books to see if they actually worked - coming out of 20+ years in a corporate cult only to find that they were really just after the money and not a humane "free the world" organization as they claimed.

So my idea of self-help was cynical - a bit.

I did find that people could read some of these books and improve their lives. Not too surprisingly, such books continued to sell well if they were simply kept in print.

The main point I found was that I didn't have to write a new series of books to help people improve their lives. There were plenty of very popular books out there which simply needed to be republished. Why re-invent perfectly good wheels - especially when those brands were already well-established?

When ebooks emerged, I jumped on that rising tide with my own boat and tested how I could navigate, successfully. Publishing Private Label Rights (PLR) books also worked. People simply were hungry for more portable versions of books.

A few tests later, with multiple batches of books, and I was sitting pretty. I had fired my last boss from my part-time freelance work and was able to simply publish all I wanted.

Working with leveraging this business, I started running into Amazon's blocks on public domain books. I then saw that actual marketing was needed to expand my sales volumes beyond four-digit monthly sales .

And our case study started in earnest at that point.

You may recall in our discussions about this area that Memberships was a topic that came up as highly leveragable.

While I was doing this marketing work on my latest batch of books, I was doing side studies into the how-to's and wherefor's of memberships. I pulled out all the notes and content I'd assembled on this area and started going over it.

This narrowed down to the Rainmaker platform, as well as the real bootstrap operations such as GumRoad - and included dusting off the DIY plug-in InstaMember.

Visit that recent post/podcast about how to reverse-market a book - it's all about building the audience first, even before the book is finished. Memberships are the simplest container for any audience, so that they can get support while supporting you as well.

That was the final straw - I didn't need to invest all my marketing coin (and sweat) into all these other sites when I could get the better result by promoting a single, fully-functioning membership site - Rainmaker. (After all, I was already paying for the service, even though I had nothing there.)

The decision to put this batch of  books - and all other publishing work - on pause became vital. (Yes, I'll still publish this batch as ebooks, and the print versions are out there. But any work on converting the "problem children" to proper print books (even PDF's) are indefinitely on hold.)

Because I've found a way to build bonfires to guide fleets of ships into the harbor - even as I build it.

The goal here is to build lighthouses on those cliffs eventually, but for now, we have to work with what we have.

The shining beacon is going to be that series of videos, as Brian Clark proposed in his podcast. What we'll do to get the brightest beam is to use the other resources which have become available since to bring even more eyeballs to that project.

In order to pull this off, I not only have to build a proper membership, but also mine that content to discover and align my books and material to the basic desires of my like-minded audience.

I will be using this same marketing spreadsheet to build a huge audience, far beyond enabling a set of books to sell better.

This may mean I go quiet for awhile as I build this scene. More than likely, I'll move to this new platform and continue blogging from a central location.

Once established properly, this new project will enable me to properly launch all my earlier books as well as any new ones.

Because we are building an audience, something most publishers (and authors) have missed. It's been my recent studies of Copyblogger which helped me drop the scales from my own eyes - and to see in the bright sunshine again.

You can shine, too.

I'll be telling you my steps and mis-steps as I go. It helps me to help you - and you can learn from my mistakes as I do.

The mantra is: Audience First.

That has uncovered the hardest conventional wisdom to drop. Like the fallacy of simply building a better mousetrap, great books don't sell themselves. Bad books, well marketed, do. Nothing is self-apparent these days.

Every author who wants to self-publish can be a roaring success. It takes study and a concentrated approach.

Right now, each of us is facing that narrow, steep, and twisting path up the cliffs where we can light the beacon to call the fleet to safe harbor.

The trick is that it's been done by others, so we can do it.

See you at the top.

Make sure you're opted-in to this series, so you don't miss a single white-knuckled adventure in this cliff-hanging series on self-publishing books.

Thanks for all your help and support. See you next time.