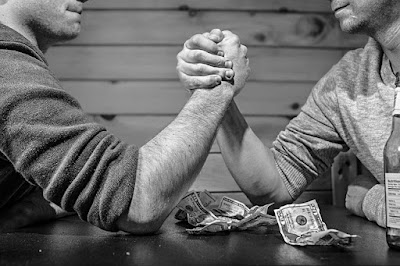 The point is branding and trademarks.


Once he had his bestselling book (and made as much as $61K per month off of it and a few others) he went on to writing books on habits in general rather than doubling down on his cornerstone work.

In his blog posts, you see that he complains how the book isn't well written, he needs to do a revision, he was shredded in the reviews, etc.

Practically, no. These are just excuses for lack of foresight (which we are fixing here by studying his back trail.)

The reviews are fine. He's got much better than average. You do want some pissy reviews, as that means it's a real book. Errors in the book are just an opportunity.

The main lesson from this is to trademark your hook right off. What actually happened is that a dozen or so other authors now have "habit stacking" in the front of their book title, as it's become a generic term.

(Note: a search on the U.S. Trademark office shows that the current publisher of Scott's original Habit Stacking book [Oldtown Publishing LLC] did trademark "Habit Stacking" - on Nov 24, 2014. The horse was well out of the barn by then. And I don't see that there was some effort to have those existing books by that name gotten into line - I do see nearly a half-dozen published in 2015 with that in the title on the first page of search results from Amazon. What good is a trademark if you won't enforce it?)

If you search on Google for that term just prior to his book being published (Sep 5, 2012) you'll find that the only mention of it is in a blog post that mentions "Stacking Habits".  Nothing on Amazon is returned by Google prior to this book.

His hook was that term - and he didn't trademark it right off. That would have kept the competition at bay by setting up a simple daily Google automated search to bring any of these to him - then a notice to Amazon that they were infringing on his rights would take down their book. Simple.

(Note: the cheap way to claim a copyright is simply put a small "TM" as superscript in the title, and then also note it under your copyright notice on your title page. Lawyers also have other tips - and I'm not one. Consult a professional. This blog is about marketing strategy.)

1. Trademark your hook when you publish, (research it first, though) and file when you need to. Oh - and go get that domain name so others can't. Even if it just points to another site of yours. (Like habitstacking.com now points to Scott's orignal book, but was only registered Feb 2, 2014. In this case, better late than never. But... habitstacking.org and lots of others are still available.)

Sidebar: While habitstacking.com points to his book, it would be just as simple to set up a landing page which would link to all the Amazon properties, and could also sell bundles and collections based on the book right there. You can't get the sale you don't ask for - or offer.

As well, If you look up "Duct Tape Marketing" by John Jantsch, you'll see another approach, which is to set up other services based on this book. More services would mean more income.

3. Come out with sequels quickly. As he knew about errors in his book, he would then come out with "Habit Stacking(TM) 2.0" and leave the original up there. Alert everyone on his site (and also update the Amazon description) that they need to get the updated version - "...while the original and now classic 'Habit Stacking' is perfectly valid, further research has found additional studies confirming it's effectiveness - and also another 54 simple habits you can stack additionally. So get 'Habit Stacking 2.0' today!" (And very definitely, do a quick update and put it into the front of the book so that link shows up on the "Look Inside.")

Since he's working in this industry writing more books, each one would be part of the "Habit Stacking" series and so be recommended by Amazon as well.

4. I've covered this elsewhere in this blog, but it bears repeating: publish your book everywhere else as well. It only takes maybe a half-hour if you already have the accounts set up. And may bring you another quarter of what you're already making in income. Bestsellers usually do well on all platforms, from my experience.

5. Publish in all other possible formats.(Which Scott eventually did.)

6. Set up a landing page on your site to promote the book, and use something like Ganxy to enable you to sell bundles of material along with the book. Like audio chapters (which promote the Audible version) and even custom-made dust-cover hardbacks which they can buy from Lulu.

7. Another smart move would be to claim the brand on the key social media. A search of knowem.com shows only Blogger and Myspace have been taken - out of the top 25, including Facebook. (Both "stevescott" and "sjscott" are all mostly taken.) You can do this yourself in an afternoon, or have Knowem do it for you. That Facebook scene is wide open for someone else to grab it, trademark or not... (And if you do it yourself, you won't have to pay a lawyer to do wrestle it back for you later.)

Then keep these updated as much as possible with IFTTT to automate your status updates on social platforms.

I'm deep in the middle of my marketing research for my next 50 books, publishing one a week for a year. But my muse kept shouting this in my ear (among other things) and so I had to blog this and get it out to you.

Sorry no podcast on this one. I don't have the couple of hours it would take to record and edit it into shape.

Luck to us all.