What Begins Well, Goes Well - and You Can Always Start Over 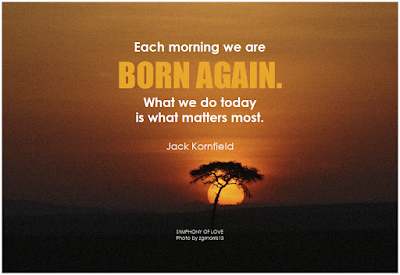 So, I was all set to get back to publishing books - when I discovered I really should drop back and punt.

(Not hand it over to someone else, but like you're playing as a kid and doing both sides of the game - practice, you know...)

I'd just reached the end of describing (with a fair amount of detail) the marketing strategy for ebook marketing.

By the end of it, I'd convinced both you and I that we aren't so much book publishers, but media-content producers. eBooks are one format we push - one that can make us considerable income - but the reason they exist is to get people into our mailing list so we can give them more value. The underlying purpose is to help them improve their lives.

About then I realized this was what the Copyblogger Rainmaker platform is all about - they had stated that idea most clearly, even though they didn't sell books (but they do give away plenty in their free membership.)

As fate had it, I was sent an email by PayPal saying that some old membership I had (which wasn't running) still was misconnected somehow to their backend.  Looking that up (it's a script called InstaMember, which I discovered and described in my Mike Dillard Expose) - I found that I'd misplaced that plug-in and had to download it again, in order to get it set up again, so I could turn it off - or so I thought. (By the end of this little adventure, I'd found the actual corner of what hard drive I had stashed it in, although I'd already paid to "extend the download period" - and also that I could have simply gone to PayPal and turned it off, but didn't discover that until I had rebuilt the blog that plug-in originally was on and got into the plug-in's setup. *Sigh*)

About then it hit me like a ton of bricks...

The sudden realization came to me that I should really be publishing all these books via Rainmaker and sending promotion to those landing pages rather than my Blogger blog-host.

And that's where I sit now. We're going to get this going for real, with a real backend.

Meanwhile, I'll still push all the content over to that Blogger backend so you can see how to do it for cheap. I owe you that much. Since I always tell you to do a lean startup in publishing and give you the frugal path first.

The reason I can afford a monthly fee to Rainmaker is because my books are selling well enough to afford it. Same with Synnd.

Memberships are tougher to set up for nearly nothing, but it can be done. (Theoretically, you only need PayPal and an autoresponder - and Mail Chimp is free for the first 500 or so on your list.)  We'll explore how to do this with GumRoad and also InstaMember.

That means I've just committed to carve up my time even more - but don't we agree that laying out all the options for you is worth it? That's why you're here, isn't - to save yourself some time? (So you don't have to spend the decade like I have just to get to this point...)

As the old saying goes,

"What starts well, tends to go well." But you also have,

All this is to explain that our next study steps will be to review setting up a membership, as I go through these with GumRoad (on Blogger),  InstaMember (on a WP blog), and Rainmaker (by itself).

Means more homework and testing for me - and probably missing some daily posts to you.

As I see it right now, we'll get Rainmaker running, then see how to do the same thing on a Wordpress (WP) setup with InstaMember, then come back and see how close we can come with Gumroad and Blogger.

InstaMember is a one-time purchase with life-time updates, so that's not bad an investment on your budget (somewhat like Market Samurai, though not so intense.)

I don't know at this point what exactly we are going to find. I know all three will work, and also that you get what you pay for.

The frugal/lean startup, however, doesn't have a choice.

As this blog is devoted to the struggling author with that ever-present day job, I'll give you these three options to see which fits you best.

The ideal is to get you to financial freedom so you can write full time (well, about a third of your day - with marketing and recharging taking the other two-thirds.)

Make sure you're subscribed by email or news reader so you don't miss any installment of this adventure...